What a night! The wind blew, the rain threatened, but it didn’t stop us from walking up Clent to the Four Stones on a dark night in November. The names were read out and Kim Topham said a prayer and it seemed to work – the beacon was amazing!
It would have been seen far and wide.
The evening went on to be a huge success with the Trench Raiders entertaining a room full of people who were fed and watered with a lovely hearty soup and some parkin for pudding. The raffle raised some money and meant that some people went home with vouchers to spend in local hostelries; but most importantly we did not forget what we were there for – to remember those who gave their lives so that we could continue to enjoy evenings such as this. 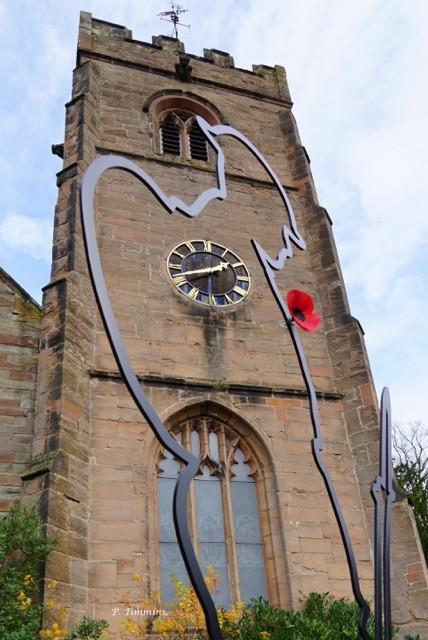 The event cannot be closed down without mention of the poppies around the village which were beautiful and poignant and the commemorative artwork of local people that was on display for all to see. The “Here, not here” soldier will have a permanent position decided very soon. A big thank-you to all those who gave their time and effort to make this such a successful occasion.

We said all along that this evening was about getting the community together and not about raising money but we have £1157 to divide between the charities linked with the Battle’s Over Commemorations – The Merchant Navy, The Royal Naval Association, the Army’s National Charity and the Royal Air Force.